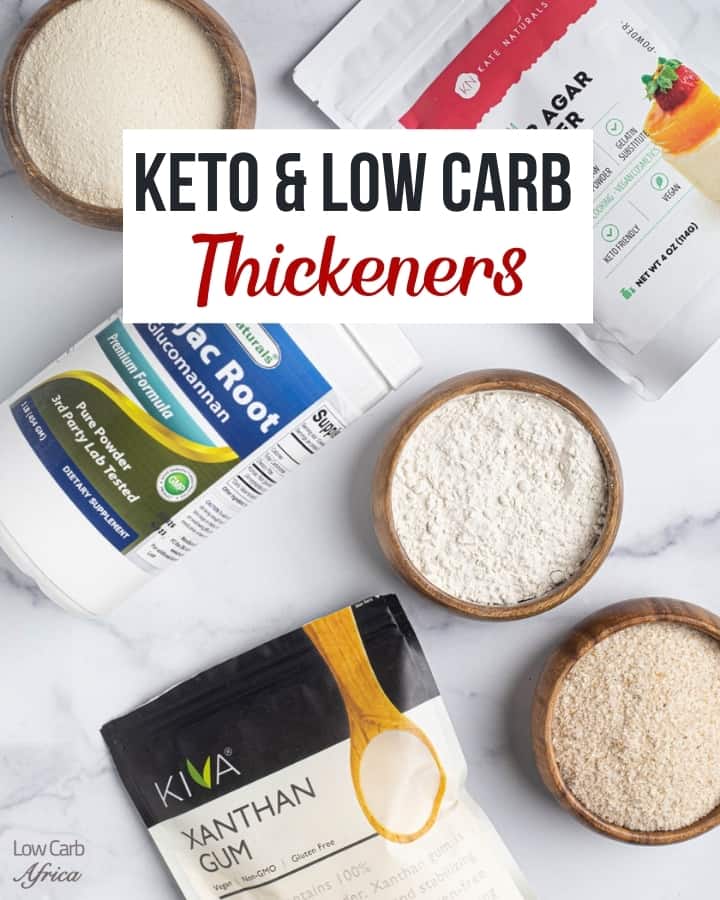 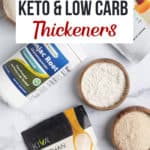 Keto and low carb thickeners act as thickening agents for your soups, sauces, smoothies, or baked goods. They make excellent keto cornstarch replacements and should be a staple in your kitchen!

One thing that has made the keto diet sustainable for me, is that I can create low-carb versions of some of my favorite high-carb dishes. Sometimes, it can be a bit tricky though, especially when it comes to using a thickening agent.

Most traditional recipes use flour or cornstarch but these are quite high in carbs and don't work on a keto diet. There are many keto and low-carb thickeners out there, but it can be confusing to know which to use and what works best for a particular recipe.

If you're wondering what keto-friendly thickeners to use and how to use them, you've come to the right place! Here are some favorite thickening agents that are the perfect keto substitute for cornstarch and other high-carb thickeners.

One of the most popular keto thickeners, xanthan gum is frequently used for keto meals and baking. It comes as a fine powder and is an excellent keto sauce thickener. It is also used in a lot of store-bought gluten-free desserts.

If you overuse xanthan gum while cooking or baking, the end product could have a gummy or slimy texture, which isn’t ideal. Use slowly and sparingly, to prevent clumping in your dishes.

A highly versatile ingredient, psyllium husk is an amazing and popular thickener. It is mostly purely fiber and is excellent for gut health. Since it is mostly pure fiber, you can even take it daily as a fiber supplement.

Psyllium husk should be used in small quantities or it might cause a stomach upset. You should also drink plenty of water after ingesting it.

This low carb thickener works really well for baked goods, sauces, smoothies, soups, and stews. Most of the time, you'll only need half or one teaspoon for your recipe.

A soluble plant fiber derived from the root of the konjac plant, glucomannan is another excellent keto thickener. Konjac pant is the same plant used to make the popular shirataki noodles.

You may be familiar with the process of making a roux when cooking: form a paste of flour and butter, and then thin it with the liquid of your choice.

Glucomannan is best used in a similar way - by making a thin, roux-like paste and adding it to your dishes. If you add the powder directly to your food, it may not work as effectively - it is best activated with a little cold water.

This powder also has similar mechanics to a roux when cooked and finished. That is, it continues to thicken dishes after they have been removed from the heat and began to cool.

This is another reason to use it sparingly - the end texture of your dish is likely to be thicker than what you have in your pot.

Produced from the tubers of arrowroot plants, arrowroot powder is similar to cornstarch in appearance. It is a very fine white powder and is quite tasteless. Which is a good thing, because it does not change the taste of your food.

Arrowroot powder is most commonly used to thicken sauces, soups, or curries. It works best with hot dishes and should be added when you are almost done cooking.

When buying this powder, be sure to check the label first. Unfortunately, some brands might have potato starch or other preservatives mixed in, and you don't want that on a keto diet.

To use this keto thickener, you have to make a slurry first. The easiest way to make this is by mixing a little arrowroot powder with some water and adding it to your dish, minutes before it is done. Arrowroot powder acts quite fast, so be sure to watch your food carefully.

Gelatin is an animal-based keto thickener that has been commercially available for a long time now. This thickener was first used to make the first thickened jams and jellies, and it works just as well today.

This powder is typically used as a keto thickening agent in desserts and sauces. It also makes an excellent keto gravy thickener.

To use gelatin, first, dissolve or soak it in water and then add the paste to your mix.

Gelatin can be bought as a powder or in more convenient, pre-proportioned sheets. Picking which one to use is a fairly simple affair - we’d always recommend the powder for thickening stews and the sheets for thickening desserts.

This is because it is much easier to add a small amount of the powder incrementally and ensure that it is spread throughout your dish. If you’re going to use the sheets, they’re typically soaked in water before use.

When using gelatin, you must always remember to be patient. The powder and the sheets can take a while to take effect in mixtures, but they’re dependable when activated.

Agar-agar If you need a plant-based substitute for gelatin, try agar-agar. It’s derived from seaweed, and is much more appetizing than that description makes it sound.

This keto thickener is mostly used in cold applications like desserts, puddings, or sauces. You can also use it to thicken soups and stews as well.

If you’re using it to thicken hot food, we’d recommend adding agar-agar at the end of the cooking time and allowing the food to cool slightly before serving. In that cooling time, the food will thicken some more.

To use agar-agar, first, dissolve it in water before used in your dish. It will also thicken gradually over time, so factor in some thickening time to your recipes.

Agar-agar can be bought in stores as either flakes or powder. It contains roughly half a gram of net carbs per tablespoon, so it’s remarkably low in carbs.

A natural plant fiber made from the seed of the guar plant, guar gum is similar in its makeup to glucomannan. This low carb thickener has zero net carbs, making it one of the more impressive thickeners on this list.

Guar gum is often used in commercial baking, as well as commercial ice cream. It has a superb ability to improve texture and consistency and can also extend the life of baked goods.

An exceptionally powerful keto thickener, Guar gum is said to have eight times as much thickening power as cornstarch!

For that reason, it is wise to use very little at first and then add very small increments - as with a number of other thickeners on this list.

Popular uses for guar gum range from baking and cold applications to soups and stews. It’s a very versatile ingredient that we’d recommend for any kitchen!

Finding a keto thickener that’s just right for you can be tricky indeed, but I hope this post has helped you understand how they work.  You can experiment with the different thickeners and see which one works best to thicken your keto recipes.

But whichever one you try, these keto thickening agents will definitely serve as a wonderful alternative to traditional high-carb thickeners!

Do you feel hungry all the time on your keto journey? Learn how to increase fat intake on the keto diet!