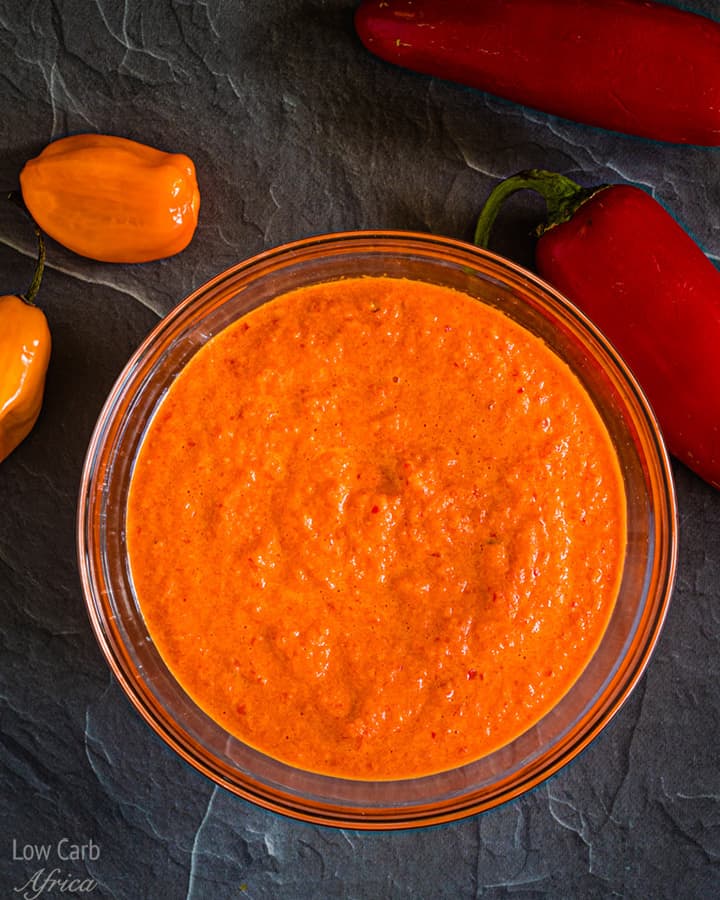 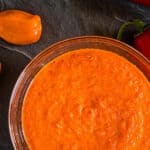 Pili pili, also known as piri piri or peri peri, is a super spicy African sauce made with chili peppers, habanero peppers, garlic, and olive oil. A little quantity is all you need for an intense, spicy kick! 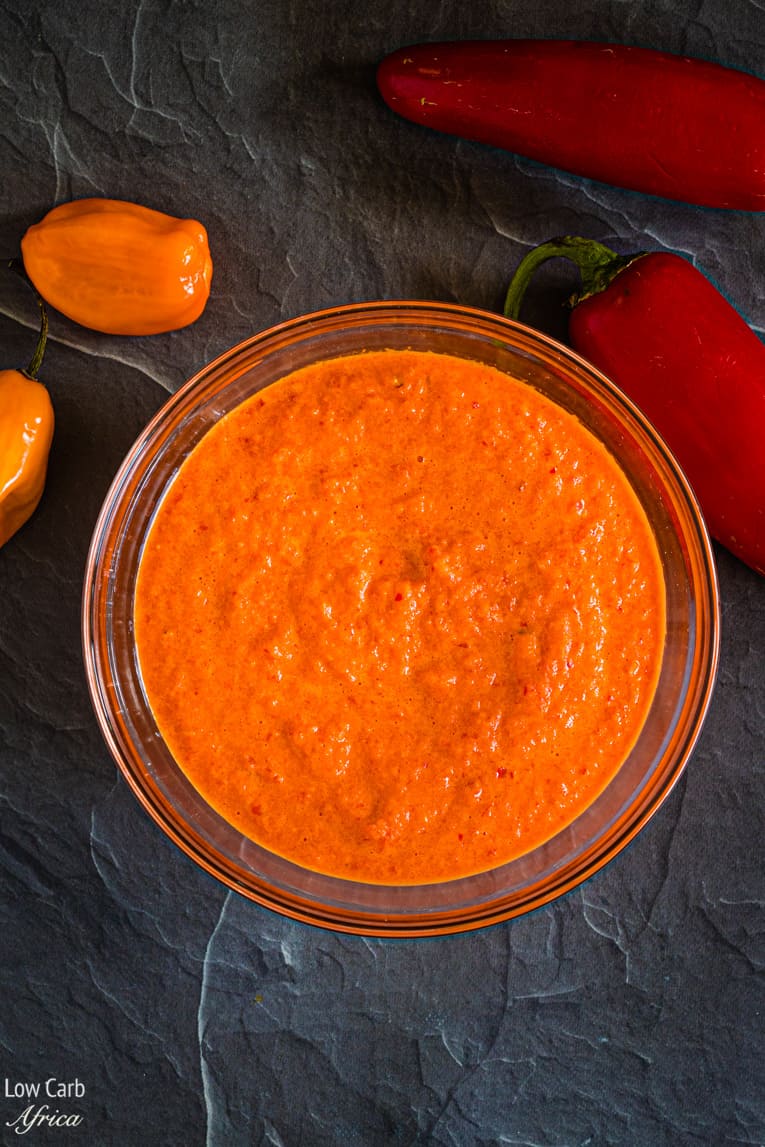 Pili pili sauce is so quick and easy to make. It has a pungent, smoky, and earthy aroma and flavor, thanks to the raw peppers used.

Its heat is intense, so you only need a small quantity to add heat to your food. If you like spicy foods, your dishes will never be the same again!

The red habanero pepper is by far the hottest. I use yellow for this recipe because that is what is currently in season.

What does Pili Pili mean?

Pili pili or piri piri literally means "pepper pepper" in the Swahili language. You know it's really spicy when they have to say pepper twice.

There is some debate about where this hot sauce originates from, but it is very popular in Mozambique, Angola, and the Democratic Republic of Congo. 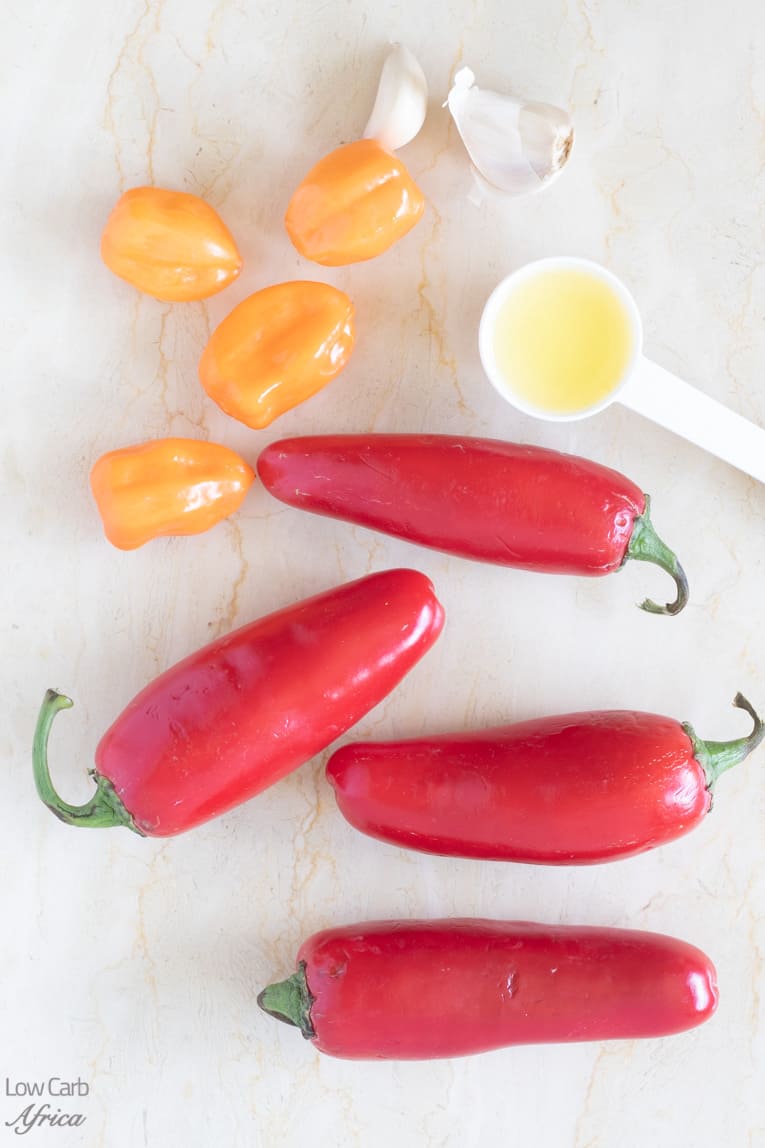 First, de-seed the peppers by opening them up and removing the seeds and core inside. I highly recommend wearing gloves when handling habanero peppers.

The heat remains on your hands long after you are done, and you will feel it if you touch your face hours later.

De-seeding the peppers will not cause them to lose their spiciness - I promise, this pepper sauce will still be super spicy. 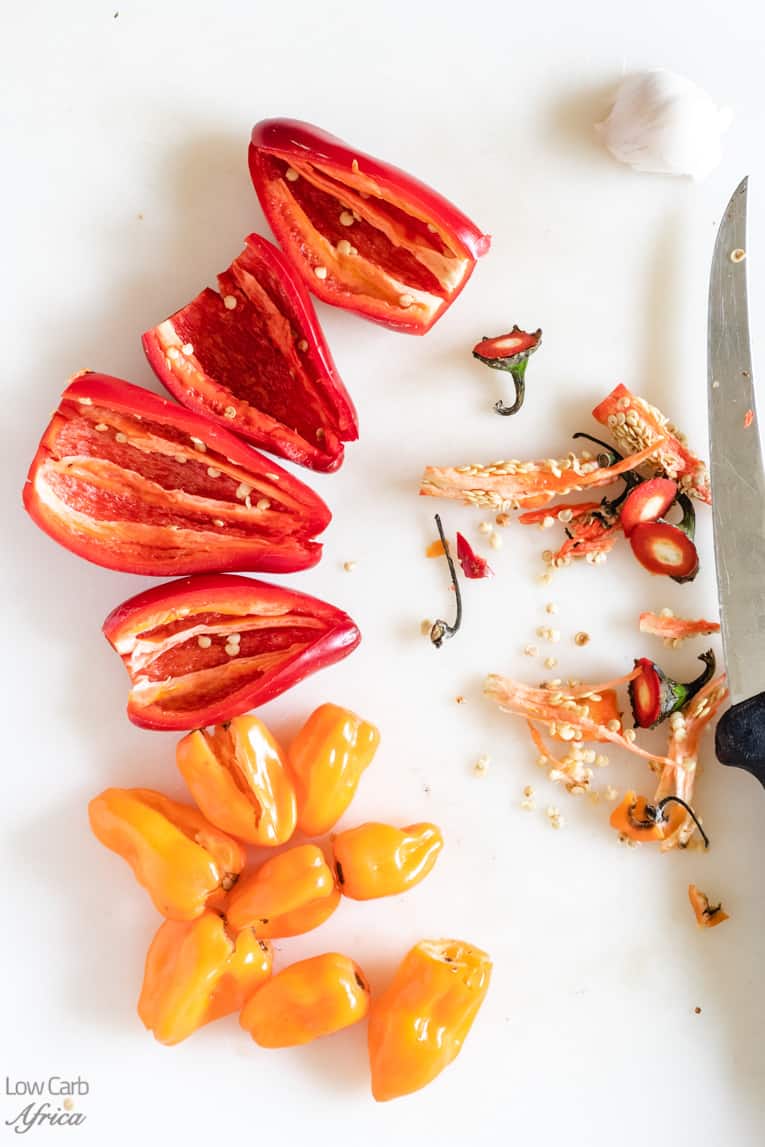 If you leave the seeds on, the intense heat might be a bit too much, so only do this if you can tolerate that much spiciness.

Peel the garlic and set it aside. Rinse the peppers under running water and dump all the ingredients together into a blender. I use a small personal blender or nutribullet because I like the idea of less cleanup, but a regular blender will work as well.

Blend everything together till smooth and pour into an airtight container. 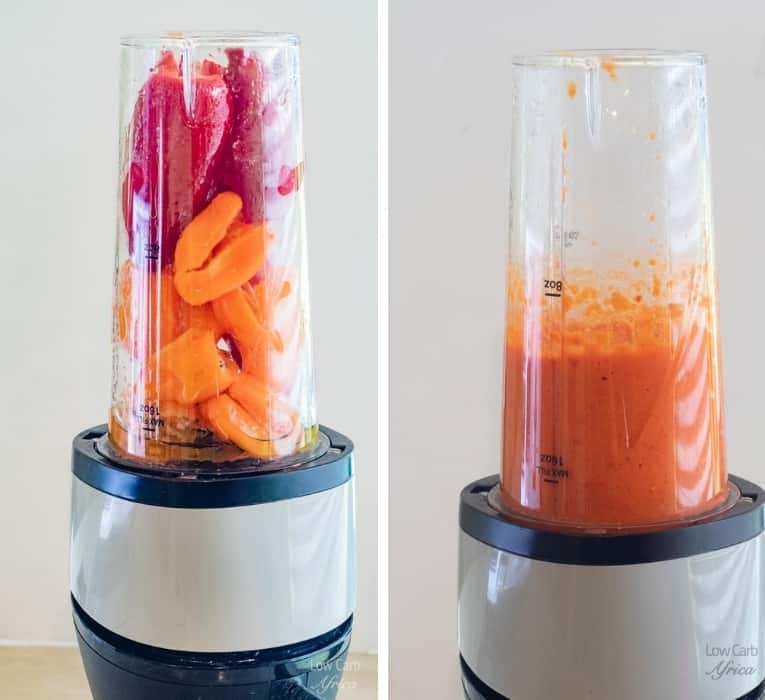 This recipe contains 15 servings and 0 net carbs per serving. Each serving is roughly 1 teaspoon and it stores well in the fridge for up to 2 weeks.

How do I use pili pili sauce?

This sauce is not your average hot sauce, it is intensely hot. I use it very sparingly and show it the same respect as ghost pepper. In other words, a little goes a long way.

You can add it to your marinade for your beef, shrimp, chicken, or fish recipes. You can also add about half a teaspoon to your food when eating.

The best way I like to use pili pili sauce is to add it to my pot when cooking. I add a teaspoon when I make a large batch of my sausage cauliflower rice skillet or my cauliflower jollof rice. 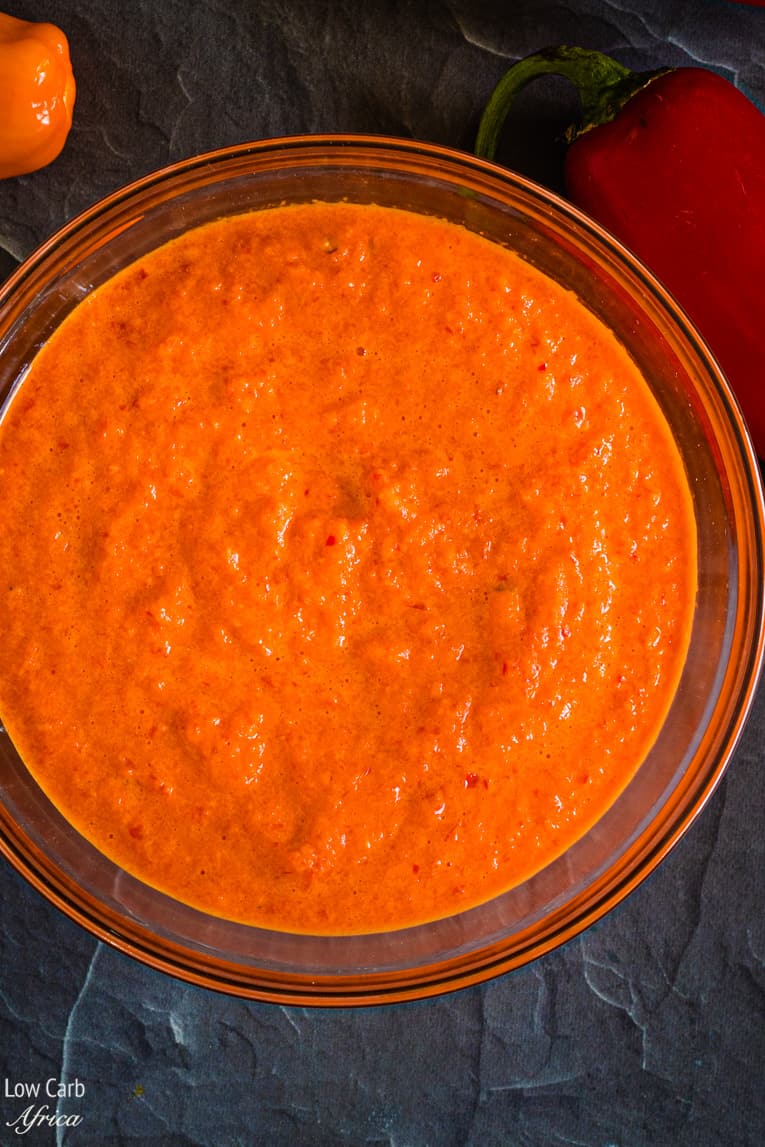 How can I make pili pili sauce less spicy?

When you remove the seeds from the peppers, use a spoon to scrape the insides of the pepper.

Rinse it, and then scrape one more time. Most of the heat is contained in the inner membranes of the pepper, so this helps to reduce the heat.

You can leave out habanero peppers altogether and only used red chili peppers for a more toned-down version of the sauce.

Variations when making this sauce

My pili pili sauce recipe is as basic as it gets, but you can jazz it up quite a bit if you want. You can add any of the following:

Here are some other favorite sauces and seasonings! 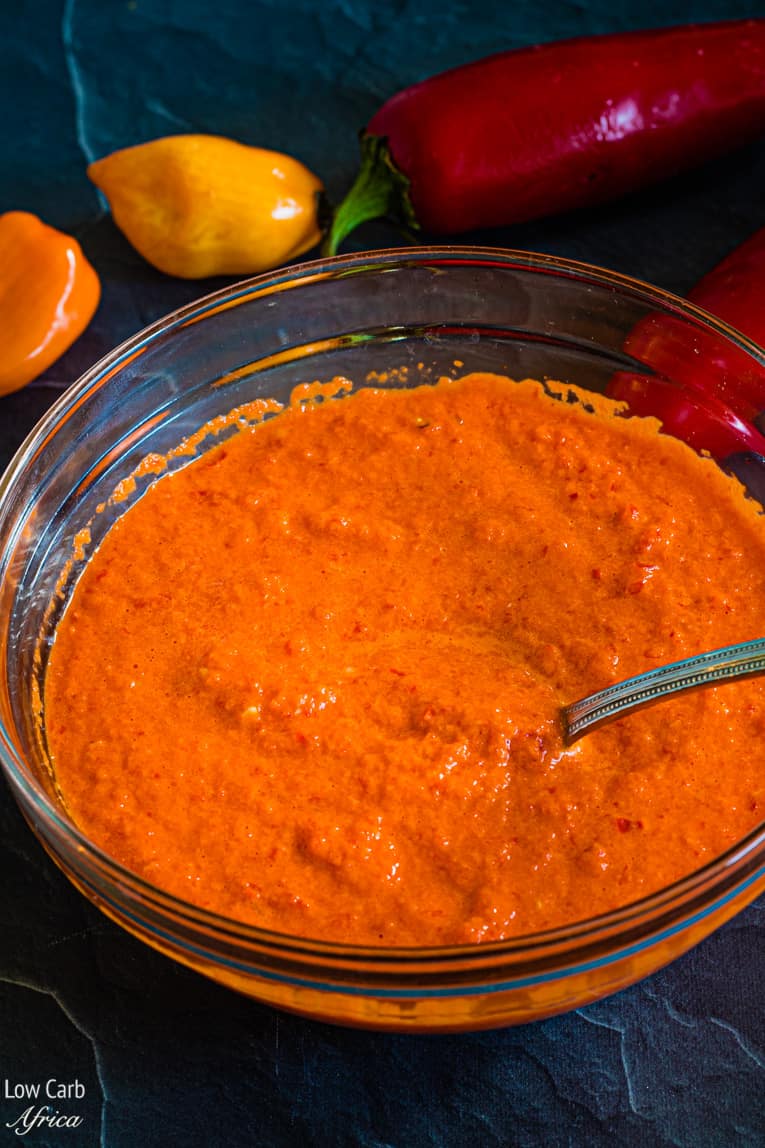 If you love spicy food, check out these other spicy recipes! 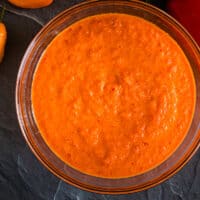 This recipe contains 15 servings and 0 net carbs per serving. Each serving is roughly 1 teaspoon.